By Gregg A Masters, MPH

It’s been a very long time since I participated in an AHIP event. In fact for the record I have NEVER been to an AHIP event – that is before this week in DC. I attended, filmed, tweeted, broadcasted from, and now blog about AHIP’s ‘Medicare, Medicaid and Dual Eligible 2013 Program series. 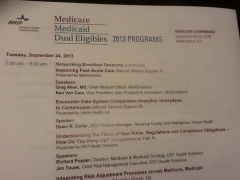 As someone who’s guided, counseled and implemented (at times successfully and other times not) some rather large proprietary, non-profit (ah hem, I mean ‘tax exempt’) health systems and their national or regionally branded provider sponsored ‘managed’ (ah hem, I mean ‘discounted’) health plans dating back to the 80s and into the millennium this is awkward if not curious (‘N’ of one?) state of affairs.

AHIP is after all is the ‘go to’ resource for the health plan community and their aligned provider and health system partners.  Yet somehow in my non traditional yet ‘mangled’ healthcare career path I managed somehow to stay outside of that tribe of dedicated and passionate healthcare professionals.

It’s been a while since the vertical integration and rabid consumption of group, IPA, or network model HMOs by national nameplates storming into the managed competition market and away from their indemnity roots (Aetna/US Healthcare, Prudential/PruCare, United HealthGroup, The Equitable/Equicor), but the players back then included the likes of HealthNet, PacifiCare, TakeCare, Maxicare (RIP)’ and many other national startup wannabes ie, Partners/VHA, UniHealth/CareAmerica, HealthPlan of America, HealthCare USA, to name just a few.

Nonetheless, GHAA meetings radiated with excitement and enthusiasm as the disruption vibe of the day was to bring this HMO thing from marginal (a 2nd tier class of docs, hospitals and ‘ancillary providers’ aligned with ‘HMO medicine’) into the mainstream. HMOs other than Kaiser Permanente, Mayo Clinic and the Cleveland Clinic were seen as less than quality ie, ‘cheaper’ medicine. Yes, back then comprehensive HMO benefits where the ‘value play’ in the group health portfolio.

Fast forward to today September 25th 2013. Consider the following: the Affordable Care Act (ACA) though approved by Congress, signed into law by the President and affirmed constitutional by the Supreme Court is a hostage to the antics of the junior Senator from Texas leading a ‘defund ObamaCare’ filibuster of sorts amidst a very real threat of a Federal Government shutdown. [Editor’s Note: Consider this the leading edge of wasting taxpayer dollars to pursue a political, not healthcare solution agenda].

Whereas, in the ‘roll up your sleaves and lets get er done’ tribe, less than a mile away at the AHIP meeting a flock of dedicated healthcare professionals and aligned stakeholders from every sector of the healthcare ecosystem [perhaps absent the patients voice?] are ‘huddling’ to share best practices, enterprise models and the technical guidance that can assist the implementation of both the spirit and intent of a very complex and mostly certainly less than ideal law.

Wow what a contrast! That ‘juxtaposition of irony’ did not escape many of the faculty including no less than one warrior of a previous similar battle, the then OMB Director Alice Rivlin, now Co-chair, Bipartisan Policy Center’s Domenici-Rivlin Task Force and Interim Director of Brookings’ Engelberg Center for Health Care Reform who opined:

‘It really is a very strange time to be here in [Washington DC] the most extreme partisan politics in my memory and I’m afraid the most broken that I have seen our democratic process. Healthcare and health insurance are caught right in the middle of this dysfunctional situation……and [in view of the potential Federal Government shutdown] given this ‘disconnect’… you might wonder, have they lost their minds? And the answer is YES!’ – Alice Rivlin

So amidst this self imposed ‘faux’ crisis the title of the blog is to analogize the ‘return’ of AHIP to its original revolutionary roots. Given the scope, range and depth of the Act, making the ACA work is in the words of previous acting director of CMS and champion of ‘the triple aim’ Don Berwick an ‘all hands on deck’ affair. We need each other all rowing in the same direction if ‘we’ are to matter this time.

If not, the party for the public/private hosting of American medicine – both financing and delivery may be over.  It’s certainly debatable whether AHIP ever migrated away from their GHAA roots or not, but this is one observer’s experience in prior team huddles.