While HMOs have been around since President Richard Nixon – yes a Republican who embraced the vision of ‘universal coverage‘ for Americans via the HMO Act of 1973 – healthcare stakeholders in the volume fueled fee-for-services (FFS) ecosystem have been mostly change resistant with some exceptions.

Nixon’s sanguine call for a National Health Strategy in 1971 will put today’s health policy and serial frustrations around building common ground on health reform in an important historical context and frankly serve as a wakeup call to all the late comers in this conversation who are just discovering that ‘health care is complex‘.

The toughest question we face then [post passage of Medicare and Medicaid] is not how much we should spend but how we should spend it. It must be our goal not merely to finance a more expensive medical system but to organize a more efficient one. – President Richard M. Nixon 1971

He further opines a theme we’re rather familiar with today whether it by the increasing popularity of direct or retainer based medical practice or the resurgence of the HMO model particularly the growth of Medicare Advantage plans:

Emphasizing Health Maintenance. In most cases our present medical system operates episodically–people come to it in moments of distress–when they require its most expensive services. Yet both the system, and those it serves would be better off if less expensive services could be delivered on a more regular basis.

If more of our resources were invested in preventing sickness and accidents, fewer would have to be spent on costly cures. If we gave more attention to treating illness in its early stages, then we would be less troubled by acute disease. In short, we should build a true “health” system-and not a “sickness” system alone. We should work to maintain health and not merely to restore it.

Some 36 years later we can still relate to Nixon’s goals for a National Health Strategy and are far from it’s fulfillment in terms of migrating from a ‘sick-care’ to a preventive or wellness based system. All of the talk about population based payments or value based healthcare notwithstanding, our system of financing and delivery remains a fee-for-services, do more to earn more web of financial incentives. This is changing though very slowly.

As has been noted elsewhere:

Given the variable and regional distribution of ‘innovation‘ in business or service delivery models supporting alternatives to traditional fee-for-services medicine, we in the healthcare sector can certainly attest to Gibson’s observation. While contextual to the tech sector it is wholly applicable to transformation efforts in healthcare.

It’s noteworthy that when Nixon signed the HMO Act into law in 1973 it was to ‘to help demonstrate the feasibility of the HMO concept over the next 5 years‘, see: Statement on Signing the Health Maintenance Organization Act of 1973.

Yet the HMO model had been incubating for a while, i.e., Kaiser Permanente dates back to 1947, as does the Ross-Loos Medical Clinic (1929) and Group Health Association of D.C. (1937). So indeed, innovation uptake in the healthcare sector does have its own unique ‘footprint‘ and experience. 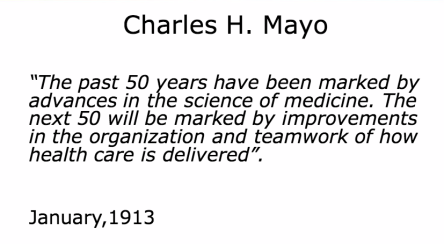 Before pivoting to today’s theme, I want to underscore the glacial pace with which the healthcare delivery and financing sector embraces change. Consider this classic observation to frame both the optimism and nature of the challenge via Charles H. Mayo, MD of Mayo Clinic fame.

Many are called to the healthcare services industry with a range of motivations, some from a sense of mission to serve others, while another cohort focuses on the upside of financial gain resulting from cures to it’s many inefficiencies and inequities.

I suspect some of Dr. Mayo’s optimism envisioned what was to come via the above pioneers in the prepaid world of HMOs that Nixon codified into law in 1973.

True to form with the uneven distribution of innovation, it’s fact that certain geographic regions have witnessed more or less ‘innovating‘ away from the industry standard FFS platform. California has been in the forefront of provider risk assumption since the mid- 1980s. HMOs in California prior to the expansion into ‘mainstream medicine‘ via the independent practice association (IPA) movement, where of the staff or group model variety. Their market share was relatively low and they remained a ‘niche play‘ of typically labeled ‘second rate‘ medicine by their mainstream ‘bretheren’. However, the handwriting was on the wall as to the directional vectors for both financing and the delivery of care.

Tuesday, July 25th at 5PM Pacific/8PM Eastern on This Week in Accountable Care, NACO co-founders Andre Berger, MD and Alex Foxman, MD will engage Don in a broad conversation on value based healthcare economy including alternative payment models (APMs), ACOs, the promise of it’s Next Generation Models and the performance of Medicare Advantage plans.