For those of you not on twitter and not following the former National Coordinator for HealthIT and now co-founder and CEO of ACO ‘Management Company’ Aledade, Farzad Mostashari, MD, I’m pasting his rich thread on ACOs and the prospects for its near term future as a tool in the healthcare finance and delivery arsenal. Conventional wisdom is and for the most part remains that ACOs are a ‘mixed bag‘ of predominantly ‘upside only’ (gain sharing), HMO-lite value based healthcare initiatives under the Medicare Shared Savings Program (MSSP) with at best mixed results on projected savings (variably calculated) to the Medicare Trust Fund.

NOTE: For additional context on the thread offered by Farzad, check out: ‘Founder and CEO of ACO Management Company Weighs in on Regulatory Uncertainty‘.

1/ 2017 #MSSP#ACO Results! ACOs have scaled rapidly across the country! In aggregate, the 472 ACOs were accountable for nearly 9 million Medicare beneficiaries and $95 Billion – that’s a quarter of all fee for service, and almost half of the entire Medicare Advantage market.

2/ If you add up all the actual costs versus benchmarks, these 472 ACOs were collectively $1.1B under their benchmarks (more on whether that’s the right counterfactual later). Medicare shared $780 million in payments with the ACOs, netting the taxpayer $313M.

3/ So that means that the best guess for MSSP savings is actually $1.75B in 2017, with Medicare paying out $780M (45%) – not a bad deal for the taxpayer!!! That does NOT count savings that come from lower costs to the taxpayer from Medicare Advantage rates that are And on quality – the average ACO earned 92% on their quality scores- and the scores improve the longer you are in the program according to the ACO Rule’s Regulatory Impact Assessment.

4/ Here’s how the CMS actuaries put it:

And on quality- the average ACO earned 92% on their quality scores- and the scores improve the longer you are in the program according to the ACO Rule’s Regulatory Impact Assesment. (The Aledade average quality score applied was over 95%, and as high as 99.8% #GoKANSAS) 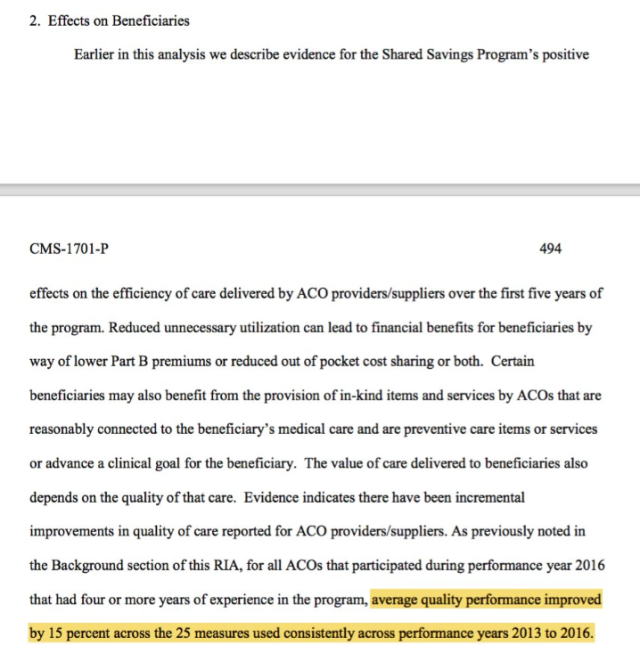 8/ You know what was a great investment? Giving small and rural physician-led ACOs an advance payment to help them invest in infrastructure and setup costs. It was critical to the success of several of our @AledadeACO. More commercial payors should do this!

9/ But what this initial release does not help us do is see which type of ACOs are creating the most value. My guess is that it’s not much different from what the CMS actuaries found for PY 2016 – ACOs that include hospitals and directly control more of the cost of care do worse.

10/ The “low revenue” ACOs (in the OACT analysis – less than 10% of total cost of care came to them) were only a third of the lives in the program, but generated roughly 98% of the savings. THAT is why in the ACO Rule CMS proposed letting them stay in low risk models longer.

11/ That was the entire thesis behind “the paradox of primary care leadership” that informed the founding of @AledadeACO That is also why @AledadeACO partners with independent physician practices, not hospitals like others do. jamanetwork.com/journals/jama/…

12/ A quick analysis by the amazing @Travis_Broome divides these 2017 results by whether the ACOs included a “facility/CCN” (CAH, RHC, FQHC don’t count for this purpose) – Same pattern- 95% of the savings are coming from the ACOs that don’t include hospitals.

13/ Only 3.5M of the 9M ACO – attributed benecificries were cared for by the smaller ACOs that didn’t include a hospital facility- and they generated 95% of the savings. If you’re an independent practice seeing these results and the policy direction, why would you join a hospital ACO?

So how did @AledadeACO do? We are always very transparent with our results- even when things didn’t go our way- to look for ways to be better, and to make policies better that are holding back broader success. This article 2 years ago was full of pain. ajmc.com/journals/issue…

15/ This was a good year for @AledadeACO. Only 1/7 freshmen ACOs made savings – but we have learned to set expectations – it’s a long game. But 5/8 ACOs that were sophomores or older will get checks. And 2/3 that didn’t get MSSP crushed it in commercial contracts.

16/ But I’m more proud that EVERY ONE of our @AledadeACO have measurably improved health for the patients we are accountable for. We have increased wellness visits, transitional care, and chronic care management- and that’s translated into lower ED visits and readmissions.

17/ So where do we go from here? The #MSSP#ACO program has been a hugely successful motivator of nationwide transformation, but it can be reformed, and I believe @SeemaCMS is on the right track. Here’s what I would expect might change between the NPRM and the final ACO rule:

18/ The GlidePath to risk reduces ACO squatting, and brings revenue-based downside risk to MSSP, but the lowered gainshare in 1st 2 years (25%) is not enough to get new entrants and ACO investments. (as suggested) “low revenue” ACOs should get higher gain-share and lower MSR.

19/ The refined benchmarking method gives greater predictability by allowing risk adjustment and regional trending-which is great! But the cap on risk adj (3% over 5 years?!) don’t control for rising risk and introduces gaming on falling risk Instead of a cap, do renormalization.

20/ Concern about “windfall profits” led to an ill-advised proposal to cap regional efficiency at 5% – In Medicare Advantage if you are efficient, you get to keep the difference, which has spurred huge innovation in the space. why blunt improvement? 100% tax brackets are not good.

21/ Credit to CMS for trying to fix the unintended “regional comparator” problem – where rural ACO savings are reduced in direct proportion to market share. But the “national trend blend” proposal makes NO SENSE. Let’s just take ACO beneficiaries out of the regional comparison please!

22/ But the biggest impact of these results on the proposed rule should be on the idea that the way to benefit the Trust Fund is to protect it from ACO earnings. These caps, etc reduce ACO earnings – and ACO motivation/participation- and therefore reduced benefit to Medicare.

23/ The NPRM RIA estimates through 2024 these caps push $390M in lower ACO earnings, but lower ACO participation under these policies will INCREASE claims costs by $60M- and would prevent beneficiaries from receiving the benefits of the program. That’s not the right balance.

24/ The magic of accountable care is when physicians & Medicare partner together to sustainably align financial incentives, help beneficiaries and the Trust Fund. Medicare hasn’t behaved like some commercial payers who are still seeing zero sum. Let’s hold onto that partnership.

As someone who’s been at the strategy table for hospitals, parent health systems, IDNs, or managed care joint ventures of all stripes AND an early adopter of this medium (I signed on to my twitter account in August 2008) believing the technology has the potential to ‘democratize healthcare’ from it’s provider centric DNA and fee-for-services fueled addiction to build ‘Cathedrals of Medicine’ separated by moats and silos from the very constituency they ostensibly ‘serve’, I’ve alternated from optimism to pessimism.

While we’ve seen some progress to date with a fair amount of co-opting, compromise and commercial exploitation along the way, I remain committed to the medium and those I follow who offer me both insights, and the connectivity to continue to refine my thought process and leadership contributions whether it be on twitter, our podcast series at This Week in Health Innovation, Health Innovation Media‘s video library,  PopHealth Week or ACO Watch blog posts. If you are NOT following @Farzad_MD or @AledadeACO, and are in the value based healthcare or accountable care space, I strongly recommend you do!