We’ve been somewhat dormant on ‘This Week in Accountable Care‘ during the summer months, but there has been no shortage of announcements with the CMS series of proscribed deadlines, as well as the purely discretionary dates associated with ACO arrangements negotiated and launched in the private aka ‘commercial’ market.

Today we touch on some of those headlines during the show including:

I appreciate Bruce’s reporting, but this is neither novel nor surprising component of the Affordable Care Act. We know what works, and while the Act is a rather lengthy and complex

document to read (lets be real perhaps 1/2 or 1% have actually read the entire document, most of us relied upon analysts and client briefings to digest the many moving parts of the Affordable Care Act), few of us actually connect the dots between seemingly unrelated program elements.

Take for example, Geisinger’s ProvenCare, and as further detailed in ProvenCare: A Provider-Driven Pay-for-Performance Program for Acute Episodic, as just one example of arrangements preceding the passage of the Affordable Care Act.

In what could be a surprising and growing trend, one of the Midwest’s largest providers of medical care is bringing a price guarantee to a new concept being pushed by the Obama administration that rewards doctors and hospitals for working together to improve quality.

ProvenCare went live in February 2006, and was preceded by considerable real world practice, over decades of bundled and fixed rate pricing techniques for both hospital and physician services. 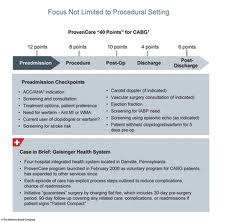 It only seems new and different through the lens of recent health reform initiatives and specifically the details of implementing the Affordable Care Act. In the world of managed care contracting, bundled or packaged pricing reached back into the 1980s.

Another article that caught my attention was addressed in a prior post on this blog titled:
Hospitals Back in Insurance Biz: Good News or Bad News?

The question was originally posed on KHNews and written almost from the point of view that omitted considerable experience of the prior entry of the hospital industry in the insurance business.

Again, lets not forget the institutional memory that does exist in the blogosphere and give both credit and context where due and appropriate.

For some levity following the KHnews piece, checkout Vince Kuraitis aka @vincekuraitis on The Healthcare Blog, titled: Hospitals…Thinking About Getting Into Health Insurance? 6 Reasons To Lie Down Until the Urge Goes Away.

Finally, the last piece I will mention is titled: 8 Accountable Care Organizations Worth Closer Look. The entities in this article are worth a follow.