Per the recent investor call [to listen via archive replay click (and register) here] the theme was perhaps best set via the following comment:

We just want to stop the bleeding… Robert Waegelein

When CMS issued the final rule for ACOs one of the first enterprising companies out of the gate to proactively roll-out an ‘ACO template’ of sorts, that was market specific yet spawned by a ‘mega MSO corporate parent’ was Universal American (UAM).

Branded via the ‘healthy collaboration’ moniker, the company was a first mover into the ‘ACO space’ intent upon building multiple regional if not an assembled national footprint.

As an experienced Medicare Advantage operator, UAM’s approach was to leverage their network and risk management core competencies and structure ACO ‘win/win’ gain sharing scenarios with their network partners – principally physicians who were not risk averse with perhaps some prior or current involvement in the Medicare Advantage program. Afterall, ACOs are merely ‘MA lite’, no?

The UAM collaboration philosophy was detailed in a prior post titled: ‘Universal American: A Healthy Collaboration?’

Who can argue with aligning incentives and sharing the savings? This is a perfect fit for the foundational principles enshrined in the Affordable Care Act and articulated in Medicare Shared Savings Program. It should work, no?

With some baseline experience UAM and other ACOs are beginning to see what works, what doesn’t and perhaps even discerning the reasons why.

Suffice it to say, the clear lessons UAM is drawing from these early ACO results (at least as reported in this conference call) include the need for scale (member concentration) in the market. A couple of hundred Medicare beneficiaries distributed over a loosely tethered provider network neither gets attention nor provides the pricing leverage the company needs to manage to a margin.

Below is a snapshot of UAM’s operations and financial position: 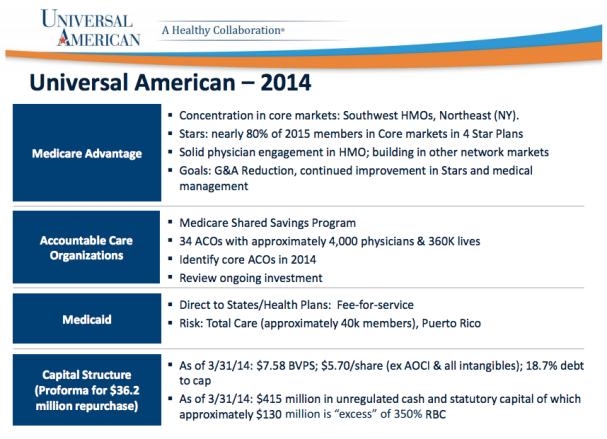 For additional context and speculation as to the meaning of UAM’s market exits on the continued growth and expansion of ACOs, see: ‘Reform Update: Insurer’s retreat from ACO investment raises questions about Medicare’s program.’

Quoting from the piece:

‘Universal American, a publicly traded insurance company that has invested heavily to become the largest operator of Medicare accountable care organizations, will no longer finance existing ACOs where its executives see little hope of financial return. The decision raises

questions about Medicare’s ability to expand the program as the agency continues to seek new participants and hold on to those already experimenting with accountable care.

“Where we’re seeing it’s not working, we’re going to stop investing,” said Robert Waegelein, chief financial officer for Universal American, which contracts with local physicians across 13 states to operate 34 ACOs in the Medicare Shared Savings Program. That’s about one out of 10 ACOs launched under the program since 2012. “We just want to stop the bleeding,” he said.

We are at best in the bottom half of the first inning. There is a long way to go on this journey towards sustainability. So before we get too carried away and perhaps even write ‘the ACO obituary’, I say ‘more will be revealed’ –  so stay tuned!