Creating consistent high quality original content is hard. At ACO Watch, we’re not in the business of breaking news or high frequency posts to drive eyeballs and traffic to this blog so ‘the numbers’ that might attract advertising or sponsorship (there aren’t any). Instead we (mostly me) watch the developments in the sector and offer newsworthy items now and then with some commentary which usually tethers to institutional memory (often failure, some successes) of having been in this dance for a while. 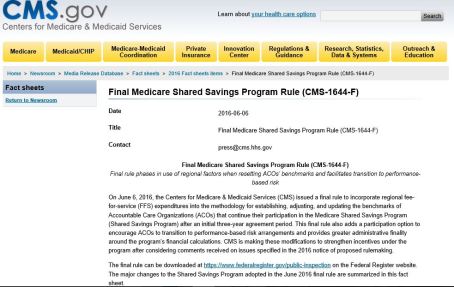 So here’s the latest from CMS on the proposed final rule for ACOs participating in the Medicare Shared Savings Program, see published rule here.

I remember back in the day when CMS was known as HCFA (the Health Care Financing Administration) and inside the Baltimore HHS complex, there dwelled an office with the name ‘Alternative Delivery Systems’ (ADS). This was the locus of staff (very modest at that time) tasked to monitor and track what was then limited to HMOs and the newly minted though ‘lite version’ dubbed PPOs.

Fast forward some 45+ years and those ‘alternative entities’ have become mainstream so to speak. Literally all benefit plans written today are contractually delivered via participating providers (IPAs, PHOs, IDNs, health systems, alliances, networks, direct or more recently ACOs) are some form of ‘managed care’ unless those providers have opted out of Medicare, Medicaid and commercial insurance in favor of Direct Practice or worse ‘Concierge Medicine’.

Since the Secretary of Health and Human Services has recently set a goal to have Medicare move away from its traditional reliance of unbridled fee-for-services medicine to a range of what CMS has or will define as ‘value based care‘ arrangements – everything from bundled payments, to gain sharing, to partial or global risk assumption by providers (hospitals, health systems, IPAs or ACOs (the next generation) much attention has focused on the right combination of incentives, infrastructure and regulatory context to move this historically change resistant healthcare delivery ecosystem into the brave new world of value vs. volume.

This is the latest effort by CMS to tweak the ACOs regs in order to meet some of the persistent objections to the program while scalably incentivizing the essential journey to risk assumption by providers is noted as:

The policies adopted in this final rule are designed to strengthen incentives in order to continue broad-based program participation and improve program function and transparency.

While the broader context is summarized as:

On June 6, 2016, the Centers for Medicare & Medicaid Services (CMS) issued a final rule to incorporate regional fee-for-service (FFS) expenditures into the methodology for establishing, adjusting, and updating the benchmarks of Accountable Care Organizations (ACOs) that continue their participation in the Medicare Shared Savings Program (Shared Savings Program) after an initial three-year agreement period. This final rule also adds a participation option to encourage ACOs to transition to performance-based risk arrangements and provides greater administrative finality around the program’s financial calculations. CMS is making these modifications to strengthen incentives under the program after considering comments received on issues specified in the 2016 notice of proposed rulemaking.

There is more to the story, and the referenced PR is here.